Yesterday I accepted a job offer for a full time position beginning in January 2011 after I graduate in December.

Yes it is EARLY to already have a job lined up. Yes, times are tough, but the offer was generous. Yes I can ONLY attribute this to God. He is good. I am thankful.

Suddenly my life has shifted. It has actually squelched some of my senioritis. There is light at the end of the tunnel and the light is good.

I felt grown up as I read over life insurance, medical, and 401k plans.

For so much of my last 2 years of college, I have been in survival mode. Just getting by till the next semester rolls around. Trying to take one day at a time, but spending most of the time thinking about what was to come.

Now it is all feeling far to real.

I glance down at my left hand, see my ring, and all I can think about is the dress I will wear in almost 9 months. The one I got last week. The one I would have danced around the store, and worn home if it hadn't been 10 sizes too big. The one I knew was THE ONE after I walked out of the dressing room and saw my mom and sisters faces.

Yes, real life, the life I’ve been praying and anxiously waiting for is coming fast. It is such a conundrum to want to soak up these last 2 semesters of college while also longing for the future.

So even though I fall on and off the ‘blogging’ bandwagon, I am very consistent with journaling.

I have kept a journal through most of high school and college. There are a few un-written large portions of life, but for the most part every broken heart and celebration is documented.

That night as I got in bed and pulled out my Bible, journal, favorite pen, and highlighter to do my evening quiet time and write about the day, something inspired me to go back and look at my entry on my 21st birthday.

Turns out I hadn't written on my 21st birthday….but I had written 2 days before it…April 13th, 2009….except on this day, I must have been having a day. Instead of a “Today I yada yada yada",  there was a list.

“Things Stressing Me Out” was written at the top and in list/number format I had 10 things that were keeping me awake on that particular evening.

9 was “I want to trust God more in the season I am in right now.”

Then 10 was written at the very bottom line and said “I’m out of freaking room.”

I laughed while I read and then stopped as I realized I was still letting the majority of the things I had written down be stressors in my life TODAY---2010, a whole year later and it was the SAME things…

I was shocked. and #9 made me be quiet for several minutes as I thought about how much my Type A personality interferes with that happening and how vital it is to remember THAT before I think about anything else that could “stress” me out.

This past weekend Daniel and I went with our Campus Ministry to Secret Church in Birmingham, Alabama where Dr.David Platt is the Senior Pastor. The lesson that night was on The Gospel: Possessions and Prosperity. It would take a series of blog posts to even begin to capture the weight and conviction of this message.

I say those a lot….most of the time just joking around of course but it put a lot of things I complain/worry about into perspective.

I want to sit in my bed (at that point, it will be Daniel and my bed :)on my 23rd birthday and write in my journal that in the past year I have trusted God each day. That I have sought him, and followed HIS will, not mine. And that by doing those I have learned to NOT worry about days to come, but instead learned how to lean on the promises of God.

Most importantly I ALWAYS want to recognize I do those things (and all others), not because of ME, but because of HIM and his abundant Grace.

So you know how its like 11:00 pm, you have a huge work presentation the next morning, and your favorite pair of khaki pants can only be worn with stripper high heeled boots because they are so long and even with aforementioned boots they are STILL too long because you are vertically challenged ???

No? You don't know about that? Oh- well, I’m like a pro in that scenario….and it brought on panic until I remembered how my mom had gotten me a sewing kit for Christmas.

I’m not a “sew-er”…… but the kit has come in handy with safety pins and a lint roller and lots of different pretty yarns that I dream about maybe one day learning how to use….except not last night, but as I dug through the kit I stumbled across a ‘semi-homemade’ kind of girls dream… 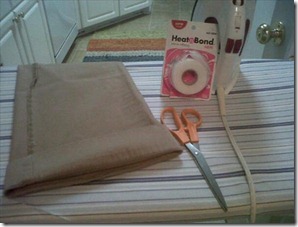 I was so excited because I have several pairs of pants I never wear because they aren't really wearable unless I have super high heels on. The world is brighter for short people everywhere!

And for all you amazing ladies out there who can sew---God bless you. Maybe one day I will learn and be crafty, but until then, it is “Heat N Bond City” on my ironing board.

(PS: Thanks to all the sweet new followers I have for your comments. I promise to get back on my game in commenting here soon, but for right now I’m just trying to get back into blogging period! I appreciate you all! <3)

A story about a little something I like to call….

Today I had a final exam. I left work a little early. Swung by Chick-Fil-A then headed to the school.

I sat in the parking lot and ate my lunch while I studied. I turned my car off-ish….Like the car was off but the clock/radio was still on. I sat there for 30 minutes, then headed inside and rocked out my test.

Before my test I was talking with a guy, Steven, who I have had numerous classes with. We were discussing “Senior Project”- a class he had just finished taking, and one I’ll have in the fall. (The final huge class before you graduate).

After my test, I walked across campus to see the ladies I work with at my on-campus job. I caught up with them for a while, then made the trek back to my car.

Because of construction on campus, I had to walk through a classroom building to get to the parking deck and I ran into Steven as he was coming out of another test.

We jumped right back into our conversation on Senior Project and both walked towards the parking deck. My car was closer than his so we walked to my car still talking and I offered to drive him over to his.

We got in the car, and I went to crank it.

Steven was like “Uh you’re battery is dead. I have jumper cables. I’ll jump you off real quick.”

I look to my left, empty parking space right next to my car. (Which almost NEVER happens in our jam packed parking lot).

I save the spot. He comes back. Jumps my car off. Easy-peasy (or something).

*sigh*. It was such a God thing. It could have been a whole lot more hectic. (1) Since I didn't know of anyone else on campus who could jump me off RIGHT THEN. and (2) Because it would have almost been impossible to jump me off regardless with a car right next to me because the spots are so tight.

Has God shown up and shown off in your life like this lately? And even in situations that might not go as blatantly easy as this one, be sure to look to Him and always know things could be a lot worse. There is always something to be thankful for!